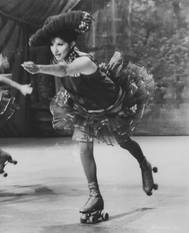 For those who don’t know me, I am Anne Zarraonandia and have been a huge Barbra Streisand since the age of fifteen. And since I am about to turn sixty this month, that makes forty-five years of being a Barbra fan! Some of you may have been a fan longer or shorter than me, but the movie What’s Up Doc? (released in 1972) was the start of it for me…and my sister Carrie, too.

Well, that’s not exactly true. After seeing What’s Up Doc? at the Montecito Movie Theatre in San Rafael, I found a double bill Funny Girl/On A Clear Day You Can See Forever playing in close by Corte Madera. My sister and brothers and I went and what do you know, when Barbra started singing “I’m the Greatest Star” in Funny Girl, I already knew all the words. And the same for most of the rest of the songs. “How could that be?” I asked my parents after the matinee. My dad replied that he used to play the Funny Girl Broadway Cast Album on the record player when as he painted in the backyard (he was an artist). He played it over and over, and I obviously was listening too, at age seven. So technically I was aware of Barbra earlier than fifteen, but a solid fan as a teen none the less.

We all have our own stories of how we became fans of Barbra. I’d love to hear from you and what it was and how old you were. For some it was at the movies for others it was a song or album. And so the thread of Barbra fandom exists between people that may or may not know each other in real life. And now we have Facebook to share Barbra!

After seeing those movies, my sister and I started collecting the record albums. We started with The Barbra Streisand Album and tried to buy one LP a week with Carrie’s babysitting money. (I’m a smart sister, you must be thinking!) On my sixteen birthday I was given Live at the Forum and other albums on holidays from then on until we had collected all of them.

Then the BJS collection grew with movie magazines like Rona Barrett’s Hollywood and RB Gossip. I started scrapbooks with anything in the newspapers about Barbra. We then started collecting movie stills. We headed into San Francisco to a tiny memorabilia shop and ask for the Barbra file. Out it came and we carefully chose a half dozen stills for $2.50 each to begin that part of the collection. Stills are still my favorite collecible and have many dozens of binders to prove it!

If you remember the 1970’s, Barbra music wasn’t necessarily what my peers were listening to, but included in my taste for the Beatles, Jim Croce, Bread, Linda Ronstadt, Carole King and the Beach Boys was BARBRA! My 8-track player always seem to have a Barbra tape in it as my Mom started up the car to drive my brothers somewhere. She would always tease me, “Is that woman screaming again?”. Barbra could hold some long notes in those days!

It’s entertaining to look back over the beginning of things that end up being a party of your whole life. What do you remember about your early days of being a Barbra fan? I’d love to hear your comments below.

What is a Barbra Fan?