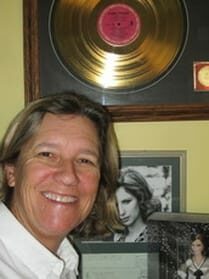 Anne Zarraonandia is a long-time Barbra Streisand fan with an extensive private collection and significant inventory for sale. This website will feature some of Anne’s collection as well as offer BJS memorabilia for sale.

Back in the late 1980s she turned her hobby into a successful mail order catalog business which was jammed packed with all kinds of Streisand memorabilia. Customers from around the world came to Anne for their special Barbra collectibles. In those days, folks ordered by snail mail, sent a check or money order, and waited for the treasures to arrive in a couple of weeks. This was pre-internet!

After the first Barbra Streisand concert tour in 1994, many of the die-hard BJS fans had get-togethers called Barbra Reunions. The first one was held in San Rafael, CA, Anne’s hometown, and about 50 loyal Barbra fans came from around the world to enjoy their shared passion for Barbra. At that time, the late Allison Waldman and Anne began the first of many “Barbra Boards” on AOL! Fans chatted and exchanged info on their favorite films, music, etc.

Fast forward to eBay, Amazon, and internet, and soon all types of people could sell their wares online. There was a glut of memorabilia accessible to all. Anne switched gears and sold not only Barbra collectibles, but assorted items like used tennis balls, antiques, and Disney stuff at her own eBay store (eBay user ID: annez).

It’s been many years since Anne printed a physical catalog and sent it by snail mail to the Streisand fans around the world. She thought, why not re-launch the “i love barbra” catalog online and have an interactive site filled with the older Streisand treasures for sale? After all it’s so much fun to see folks get excited about finding an old magazine cover or record that is missing from their collections.

Anne has met Barbra twice and even shook her hand on one occasion. (Yes, her hands are “like buttah.”) Hearing Barbra sing in concert was a lifelong dream which Anne has relived 8 times in Las Vegas, San Jose, and Anaheim! Anne also went to Barbra’s New Year’s Eve Millennium Concert in Las Vegas! Who would have thought that Barbra would ever sing “Miss Marmelstein,” or “I’m the Greatest Star,” or “The Main Event?” A night to remember for sure! And the power stayed on!

Another fun fact: Anne sold a bottle of RARE Barbra Champagne to the Rosie O’Donnell show for Rosie to pop open when Barbra was her guest, the first time she appeared on the long-running TV program. Funny how all our worlds collide!

Anne is a former teaching tennis pro living in Marin County, California. She and her sister, Carrie, played in tournaments all over the United States. They have won many national titles and have been ranked #1 in the U.S. in women’s 30 and 35 doubles.

Anne has a fifteen year old son who is a computer nut. She continues to add to her gigantic Barbra collection whenever she can. Selling on eBay and Amazon fills most of Anne’s days right now, but with the re-launch of the “i love barbra” catalog, there is more time for her Barbra passion as well!