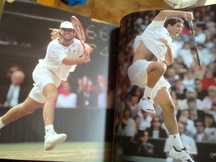 Back in the early 1990’s Barbra Streisand attended the Wimbledon tennis championships and rooted her friend Andre Agassi on! On this rest day, the middle Sunday of Wimbledon its a time for looking back at Barbra the tennis fan.

In 1993 Andre Agassi’s quarterfinal opponent was the great Pete Sampras. It was a tough five set match won by Sampras, but in the friend’s box was our Barbra sitting with Phillip Agassi, Andre’s brother. All eyes were on Barbra as she cheered her friend on!

There friendship was based on a mutual respect for each other. He called her after watching “The Prince of Tides” and she said about him, “He is very evolved and plays tennis like a Zen Master.” Both were stars in their own arenas and had formed a mutual admiration society.

Barbra was also a guest in the friend’s box at the 1992 US Open tennis tournament in New York City, her hometown. The camera spotted many celebrities that event, but none bigger than Streisand!

Andre spoke about Barbra fondly in his 2010 autobiography “Open”. It is one of the best sports biographies I have ever read and I’ve read many movie and sports stars personal stories! Though there is a 28 year age difference between them, they connected as kindred spirits to be sure.

Barbra Streisand Returns to The Tonight Show After 50 Years!