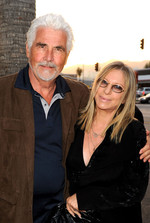 Happy Anniversary Barbra & Jim! July 1 is the date and they are still going strong! Talk about a Hollywood Power Couple! And attractive too! In person, James Brolin is one handsome man! I remember seeing him at the New Year’s Concert at the MGM Grand in Las Vegas going into the new millenium and my brother was down in the 4th row near the stage. I sat with Mike in his awesome seats and what do you know, James Brolin sat directly in front of us. I had to suffer and see the stage through his hair right in before our eyes. What a hunk! So handsome! It was hard to keep my eyes off him when after the  intermission when Barbra came out for the second portion of the show.

And Barbra as we all agree is pretty awesome too! Together not too bad! When they are on the red carpet, all the photographers clamor for their glamour! By all accounts, including some comments from them directly, they have a mutual admiration society! They balance each other and compliment each other as well.

Jim makes Barbra a regular person. And she loves his self-confidence and the fact they are equals in their relationship. It takes quite a man to do that! They show up to support each other in public and still have a private life that is their own.

We fans continue to wish them continued good health and happiness! What a team and easy on the eyes to boot! Happy Anniversary!