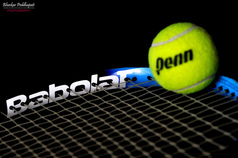 As I write this blog post, the Wimbledon tennis championships are still in full swing and I wanted to point out that Barbra Streisand herself played tennis in one of her all time classic films, The Way We Were.

In the early 1970’s she took tennis lessons from all time great Pancho Segura and mentor of Jimmy Connors, in order to get ready for a scene where she took the court with Robert Redford. It’s been well documented that Redford was an all around athlete as a youth and played baseball, tennis and skied very well. Barbra’s childhood in Brooklyn didn’t include a lot of sporting opportunities, but living in California in her adult life allowed her to take an interest in tennis.

In the tennis scene in “The Way We Were”, Barbra walked onto the court, wooden tennis racket in hand and immediately hit a serve! Not bad for a girl from Brooklyn! Especially without a warm-up!

Streisand’s Malibu compound had a tennis court and I was lucky enough to play on it when on of the Barbra Reunions was held at her former estate in the 1990’s. What a thrill for me! I have to dig up a picture that fellow Barbra fan and professional photographer Joe Marzullo took of me on the court. I brought two rackets from home and convinced a couple of my BJS friends to hit a few balls with me! It wasn’t the same as if I played with Barbra or Redford, but I did play ON Barbra’s court. There was a viewing area above the court and tucked in the corner near the fence was an old ball machine. I heard that Jason Gould, Barbra’s son took lessons on that court during his teen years.

Next time you catch “The Way We Were” on television or watch you own personal DVD of this love story classic, watch for Barbra the tennis player! It will make you smile for sure!