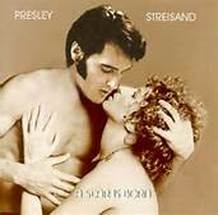 In honor of what would have been Elvis Presley’s 82nd birthday today, January 8, 2017, we have a contest to caption this photograph from what might have been.

Elvis was considered for the role of John Norman Howard in A Star is Born. It would have been an amazing mix of old and new talent, Elvis and Barbra. Barbra and Jon Peters sat down with Elvis for two hours talking about his involvement with A Star is Born, but Colonel Tom Parker, Elvis’ legendary manager refused to consider the idea. Elvis was really in no shape to appear in a movie at that time. It would have been a fabulous rebirth for his career. Not long after, he was gone at age 42.

Above is a pretend version of the famous album cover from Star. Can you put a caption to it?

In our contest the winner will receive an 8×10 photo of Barbra and Sadie with pull out easel back, ready to display. Captions must be summitted as comments below this blog posting. Captions must be submitted by January 10, 10pm PST. Good luck to all.

And Happy Birthday to the King of Rock ‘N Roll!
​

Streisand – come rain or come shine on the tonight show 2014