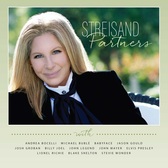 It is so nice to hear that Barbra has broken another record, her own! With her latest album, “Partners”, she has received her 31st platinum album (shipping at least 1,000,000 units) certification from the RIAA. Her closest competition is Reba McEntyre with 19 platinum albums.

“Partners” was the 7th best selling album of 2014 in a time when people just don’t buy albums anymore. It debuted at the No. 1 spot on the Billboard 200 in Sept. 2014. It was her 10th album to top that chart, making her the only act to notch a No. 1 album in each of the last six decades.

Back on November 10, The Recording Industry Association of America certified Barbra Streisand‘s album “Partners” as gold, with over 500,000 sold (the 52nd of her career).

Here is a clip of Brian Williams on NBC News with the story.

Can our Funny Girl win a Grammy for this incredible duets record? Stay tuned February 8, 2015.