About 25 years ago, I had a fun mail order business selling Barbra Streisand memorabilia to fans from around the world. My little venture was known as the “i love barbra Catalog”.

My mailing list was in the hundreds and hundreds and I received letters daily at my Post Office Box in San Rafael, CA (now closed PO box). It was always fun to read the many letters and notes, but receiving the orders were the best! Checks and money orders and international money orders came in all the time, especially right after I mailed out a new catalog.

My first customers were from ads I placed in Barbra Quarterly Magazine and Rona Barrett Hollywood and RBGossip Magazines. Then I advertised in the Best Catalogs in the World where people sent them $1 and I received mailing labels in exchange, which in those days cost me 50¢ a piece. It was well worth it, because my database grew and grew.

I made my catalog on a word processing program for the Mac called ClarisWorks, later known as AppleWorks. Every item had a catalog number and I would add photos to the pages too, but printed it all out in black and white with a colored paper cover. Very simple, very quaint, but I loved producing that month after month, quarter after quarter, year after year.

This was all before eBay and internet shopping. I went big time when I made a simple webpage using PageMill (again for the Mac) and hosted it on Earthlink. I didn’t have a fax machine to receive orders, so I got a free number from eFax which was actually a Massachusetts area code, though I was in CA.

This was also before PayPal, so I happily accepted checks and money order and never once received a BAD one! Talk about trust AND good fans/customers.  I continued to grow and took on a merchant account for credit cards and could accept Visa and MasterCard from customers, so the order sizes grew from $10 to $100 in many cases.

I managed to get the “i love barbra Catalog” into Barbra’s hands from a BJS business associate and she told him that the catalog was “cute, but the prices were too low”. So I raised my prices.

I had a couple of long time customers/Barbra buddies whose collections grew and grew from buying from me. I had more fun finding stock for the catalog that my collection grew too, since everything I offered was a duplicate of something I already owned.

My most famous customers were Rosie O’Donnell (her TV show producer made the order) who bought Barbra Champagne for when Barbra appeared on her TV show and they toasted at the end of the segment.

I also received an order from Cis Corman (Barbra’s longtime friend and producer) for some movie stills from Up the Sandbox and Hello Dolly. Imagine my surprise when I sent the order to Barbra’s New York address!

Once eBay happened, the catalog phased itself out and competition grew big time. I was one of the only games in town for a long time and fellow fans knew me as a fair seller and BJS devotee as well.

I miss those days, but have the memories of a simpler time before the explosion of online selling took off!  These days you can find many Streisand items for sale on my eBay store. Check it out and let me know if you are looking for anything special. I will try to track it down for you! 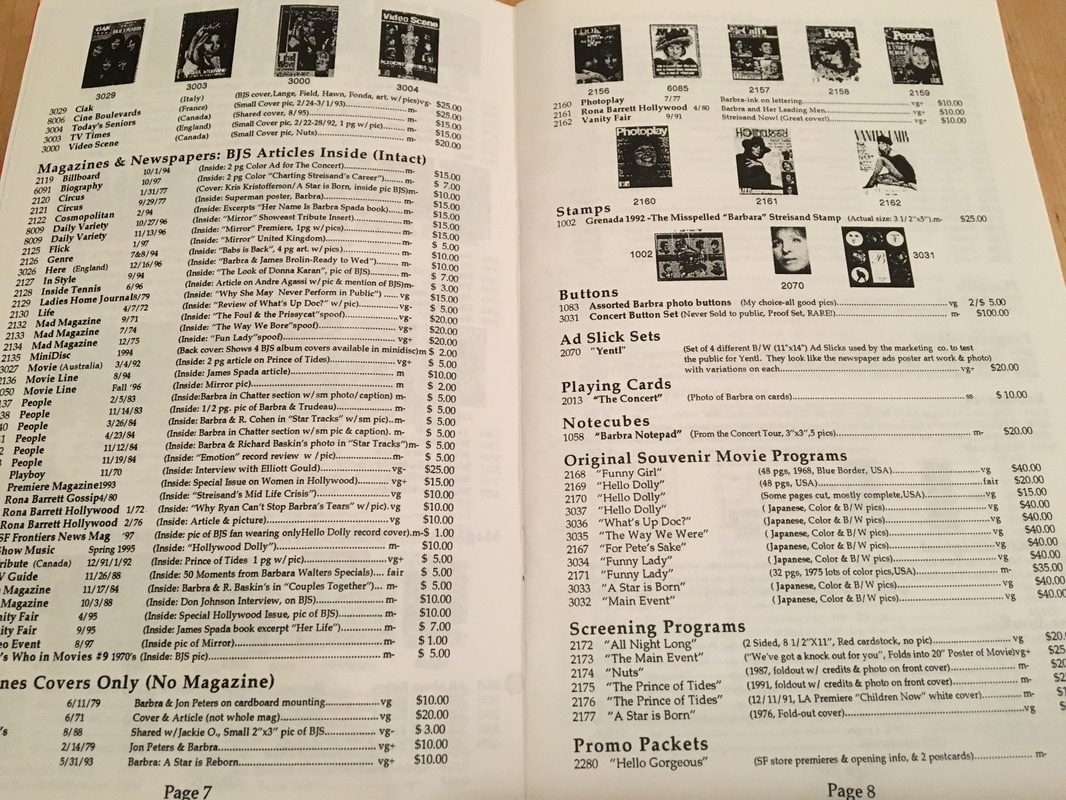 Barbra Streisand Returns to The Tonight Show After 50 Years!