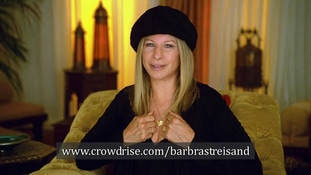 It’s day 25 of the Ultimate Blog Challenge and I’m still trying to pick a topic to blog about. So I head to BarbraStreisand.com for some inspiration – and under the section called Truth Alerts the last posting was from 2014, but under Articles of Interest, there are many new entries, related to the politics of the day. Who could be surprised? Barbra is very involved in our world as a citizen.

Last week she was on MSNBC as a call in guest with Chris Matthews speaking her mind about Donald Trump. The funny thing about the call was that Barbra admitted to being at the dentist getting her teeth cleaned. She is constantly studying and contributing to the national political dialog.

She contributed an article to the Huffington Post as well before Trump’s swearing in, laying out many of her views. She is certainly not shy in those views. She then spoke our and gave a passionate speech during the Women’s March in Los Angeles over the weekend.

As an entertainer, she gives it her all and as a political activist she does the same. You may or may not agree with her views, but she makes a compelling argument when she writes or speaks her mind about what’s happening in our world. I for one appreciate her energy and compassion for others when she speaks out. Thanks Barbra for using your voice! I’ll keep listening!